What Should I Draw – IS THERE AN IDEAS FAIRY!!!? 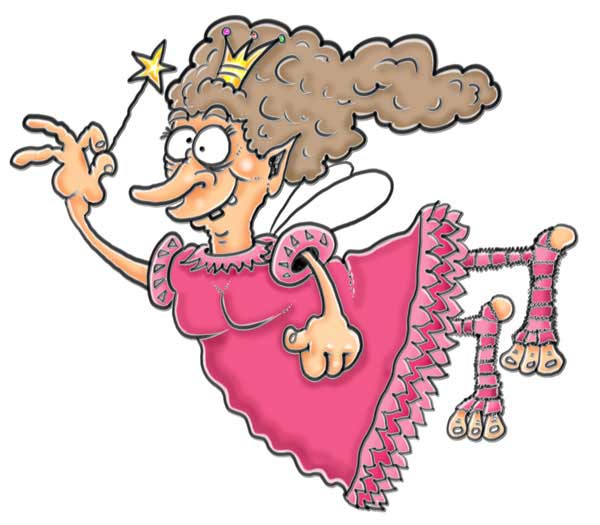 Staring at a blank sheet of paper… what should I draw? My thoughts drift to the kitchen.  Perhaps another cookie will help my blank brain.  Why can’t I think of that hilarious, rib-tickling idea that other cartoonists seem to do with little effort?  The truth is that most cartoonists have these moments which soon pass (and come back like the bubonic plague!).

Have you been in this situation where even your best friend – the ‘Ideas Fairy’  is having the day off! Gone to have her wand serviced and wings permed.

My task was to complete a humorous cartoon on the subject of percussion players for Brass Band World Magazine which I am the resident cartoonist.  A task that should be a piece of cake…ha!…ha!…ho!…ho!…no!….no!

I wander out of my studio into the yard and stare at a scabby woodpecker guzzling peanuts and sunflower hearts on the bird feeder.  How can woodpeckers get that much down their throats in such a short space of time and still be able to take off?.  ‘Perhaps there is a cartoon in that’, I mutter.  But still, there is only white noise and not a hint of mirth.  I shriek obscenities at the feathered glutton who takes no notice and continue gorging like there’s no tomorrow. I venture back in.  Creatively shortchanged, inadequate and bereft of bird feed.

The doorbell chimes and before I know it a tiny man with huge boots steps into the hallway with paintbrush, ladder and an amazingly bright red beard that seems to meander across his face like a rattlesnake that’s been disturbed.

Then I remember.  My wife had engaged the services of the aforesaid Hobbit to paint the kitchen walls and ceiling.  My wife is an expert at arranging major alterations and deliveries…when…she is not there!  I show Mr. Hobbit into the kitchen and he looks studiously at the walls, says nothing but grunts a few times and turns on his heel out of the front door in a ginger blur.

‘Fancy a cup of coffee’ I call after him politely.

Baggins shakes his beard and replies in a deep, gruff voice ‘Water!’

I can only assume that this particular breed of Hobbit was either nursing a hangover (his pale blue eyes were extremely bloodshot) or perhaps a shot of caffeine at this time of day would give him a hyperactive brush.

I pour a generous glass of water and place it next to his brush on the kitchen table.

Mr Hobbit re-enters carrying an emporium of painting equipment which he carefully lays out on a large dust sheet.  Scores of brushes, turpentine, sandpaper, several knives that Jack the Ripper would have approved of, Pots of paint, buckets, clothes, rags, a large tool bag and his lunch.  Now call me old fashioned but you would think that a man barely five feet tall would not require much fuel to paint a couple of walls.

Not so the Hobbit…He must have the internal combustion engine of several large cart horses. His picnic basket was spread open to reveal enough food to quell a third world famine.

It was like watching Mary Poppins with her cavernous carpet bag.  Similar but not as good looking or with the same finesse.  From the grand canyon appeared a cake stand filled with muffins.  Plates of pizzas, several loaves and a large assortment of breads and pickles.

‘Can’t work on an empty stomach?’ I enquire.  Bilbo works his way through the banquet without response. I didn’t see him take a breath as the pile of muffins disappear into the fox-fur lined cake-hole.

I left him to it and retreated into my artman cave still uninspired.  I keep thinking about his asp like beard, incredible appetite and could not concentrate on my own creative issues.

From the studio window that darned woodpecker sits in digestive bliss, bending the branch under the weight of my hard earned peanuts I am just about to abandon hope when it happened!  A blur shot past the window and the woodpecker disappeared from the tree with a thud of feathers.  The blur was a hawk and both hawk and woodpecker were now in fearsome mortal combat in the yard.

The blur was about to become a more interesting haze as Baggins flew out of the kitchen door to join the murderous maelstrom.  I thought he had intervened to save the poor woodpecker but I was wrong.  The hawks self-survival instinct kicked it and it flew off as fast as it had arrived.  Baggins had the woodpecker by the neck and marched back into the house.  I was intrigued!

By the time I got into the kitchen, the woodpecker was deceased with beak and legs pointing skyward in the Hobbits toolbox.  I enquired as to its final destination to which I had the one-word answer….”Pie!”  Woodpecker pie – now there’s a thought!

With no more verbal interaction apparent I retreated back to the studio. Within three hours the kitchen was painted to an amazingly high standard.  Mr. Hobbit had cleared everything away – it was as if he had never set foot in the house.  Not one drip of paint or a feather in sight!

I went to shake hands and thank him when he uttered “Pay” and handed me a grubby piece of paper.  I looked at the fee, winced and explained that I had no cash in the house.  ‘Pay’ he said more gruffly. After a few sharp exchanges we agreed that I would bring the cash to his house that evening and he was gone complete with painting equipment and rigor mortis stiffened pie filling.

Where am I going with this story I hear you ask!  Well…I was still out of luck as the brain had been so distracted by events that I had been unable to focus on getting myself some solid ideas.  I cursed my inability to stay on topic.  What I needed was a new brain.  A different brain that could block out trivial goings-on and keep me firmly focussed on the task in hand.

And then the spark of inspiration flashed from this very thought. A new brain!

Percussionists have always been the butt of many cruel jokes and some say that percussionists, particularly drummers are not the sharpest tools in the tool chest.  Thinking also about the events of the day I quickly mind mapped the main events.  A Hobbit. A woodpecker.  Paint brushes and paint.  A hawk.  I scribbled these events around the main feature of ‘A New Brain’ and set my mind to work.

I quickly discarded the hawk and painting and swapped the Hobbit for another short fictitious character ‘Egor’…Voila – I had the cartoon for the next Months Magazine.  Frankenstein asking Egor to pass the perfect brain to put into his Percussionist Monsters head – the brain of a woodpecker!

I also pictured the scene from the brilliant and hilarious ‘Young Frankenstein’ starring Gene Wilder which was produced in black and white to give it a classic film look and decided it would look much better in greyscale.

I quickly sketched out the scene of Baron Frankenstein and Egor inserting a woodpeckers brain into the monsters head to make it a perfect percussionist!!! I created four layers in photoshop:

Within an hour or so I had finished the cartoon.

Here is the finished cartoon produced in Photoshop… 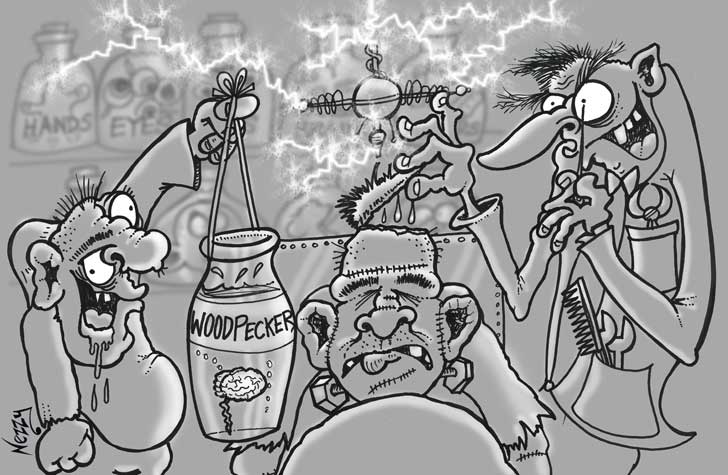 What Should I Draw – Conclusions!

The moral of this story has two alternatives.  Either block out distractions at all cost…or…hope that whatever disasterous day you have throws up a great idea!  You will always come up with something no matter what challenges your day holds for you. 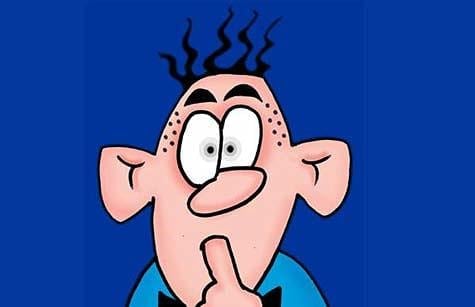 If you are ever stuck for an original cartoon idea or suffer from dreaded cartoonists block please try out my method of finding something new from nowhere! – See the article right here…